How to survive Tahrir square as a woman 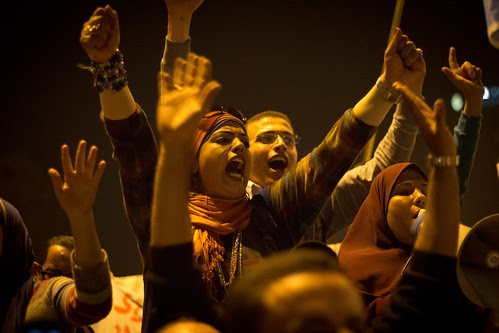 With the watch towers and the organising of ‘bodyguards’, some people are finally attempting to address the ever increasing sexual assaults on women in Tahrir square. It’s a start, but unfortunately the square is still a very volatile place for a woman.

I’ve been walking around on Tahrir since the first days of the revolution and here are a few ‘rules’ I’ve picked up along the way that seem to minimize harassment. Most of them may seem fairly obvious, but you’d be surprised at how many females I meet that are completely oblivious to these simple measures. So here goes:

* A disproportionate amount of sexual assaults seem to take place on Mohammed Mahmoud street, near the Hardee’s and Pizza Hut. The area in front of the Mogamma also appears to be a hot spot. So, as a first rule: avoid those areas.

* Another obvious one: do not go to the square on your own after dark. I still wonder around Tahrir on my own in the daytime, but never after sunset. That’s when most assaults happen.

* When walking up to the square, take note of the atmosphere. Are there many guys staring at you, paying attention to you? Is there a disproportionate amount of cat-calling? If so, that is a sign to be extra careful. Also, if the amount of cat-calling, staring and grabbing increases as you walk along, something is obviously up, so make you sure get out as soon as possible.

* Bring one or more, preferably Egyptian, guys. Fellow foreigners will most likely only attract more attention as will going with a group of other girls. If you go in too big a group chances are you’re too distracted to pay proper attention to what is going on around you. Foreign guys that speak (Egyptian-) Arabic might arouse suspicion and have people accuse them of being a spy, which only causes more trouble.

During the last few protests on Tahrir I walked around with either an Egyptian former karate champion or another local friend of mine who is almost two metres tall (ie. the tallest Egyptian male I have ever met). I realise that one guy isn’t going to be able to do much when faced with a mob of dozens of men, but in general, walking around with a guy certainly seems to discourage harassment.

* Make sure the guy(s) you bring is/are aware of sexual harassment and can pick up on things you might miss out on. Don’t bring someone that has their head in the clouds or is prone to lingering and meeting new people on the square. Make sure they are assertive and will tell people to back off when they sense something is off.

* Make sure your ‘bodyguard’ walks behind you to prevent grabbing and touching. If you have two bodyguards, one walks in front of you, one behind you.

* Be acutely aware of your surroundings. Don’t make eye contact with people, but do make sure to look around and be aware of what’s happening not only in front of you, but also next to you and behind you. Make sure there is no one following you around, preying on you. As soon as you are being followed around the square make sure people around you are aware of it too. Point the guy out and yell at him angrily. Make a scene. Whether you do this in Arabic, English or Klingon doesn’t matter, people around you will understand and help you out. Try and get Egyptian women involved, as they will pick up on the issue especially quickly and will then proceed to in turn harass the fuck out of the guy.

* Walk quickly and don’t linger. Unfortunately, Tahrir - especially at night - is no longer a place for hanging out and socialising when you’re female, so save that for well outside the square. The second you stand still chances of harassment increase dramatically, try to keep moving as much as you can.

* When walking through a crowd, try and walk behind (or near) other women, or girls (not boys, harassment starts young, so unfortunately that’s not a safe option). They won’t harass you.

* Try not to get distracted by cat-calling. Yes, it’s annoying, but your main concern on Tahrir should be to try and avoid getting physically assaulted. Don’t waste your energy on cat-callers, just ignore them. In my experience, giving them attention will only make it worse anyway, and if you ignore them in most cases they will just give up. As soon as the cat-caller starts actively following you, however, revert to the tactic I mentioned above.

* In my experience most Egyptians are overly protective when it comes to foreigners, and female foreigners in particular. Nonetheless, when they alert you that a certain area is not safe or warn you not to go to a particular part of the square, take their advice. Better to be safe than sorry.

* Walk in zigzagging lines to avoid being followed. I’m fairly small, so for me it always works wonders to occasionally duck behind a group of tall people and surface a couple of metres later. It confuses the hell out of anybody trying to follow you because they lose sight of you for a while.

* If the crowd looks too busy to still be safe, it probably is. If your instincts say no, don’t go in.

* Stick to the wide open spaces. Don’t let yourself get caught in between those green fences that line the sidewalks of Tahrir and the part near the Mogamma, ‘cause when you do get in trouble, they are a death trap, as they will hinder your way out. Same goes for the barb-wired fences that occasionally get put up at the entrances of the square.

* Wherever you go, always make sure you have a way out. In my mind I constantly go ‘get to that group of women, duck behind that stage, sneak past that group of media people with cameras and hook up with that next group of women up ahead until I get to one of the square’s exits.’

* I usually walk around with an oversized square leather bag that covers my back from my midriff to a few inches below my buttocks. I put something heavy at the bottom of the bag to weigh it down, so wondering hands simply can’t get to my backside.

* The middle of the square, where all the tents are, always seems to be harassment free, so if you need a break, hang out there. I’ve never found the middle to be packed with people, there’s always room to sit down and catch your breath. It’s also a good safe zone to avert to when you do seem to be getting in trouble.

* Don’t carry weapons (like a knife) as they can easily be used against you. The other day I was caught in a scrum of people running away from a police charge. One guy took advantage of the mayhem, cornered me and started rubbing his business up against me. I scratched him in the face with my key and managed to escape, but if my initial ‘attack’ hadn’t averted him, I only would have angered him and I would have been in even more trouble.

I’m not trying to scare anyone out of going to Tahrir by writing this, but sexual harassment, especially on the square, is unfortunately a very real danger. By writing these guidelines I am of course by no means implying that the women that get assaulted in the square are careless individuals that were not paying attention. Even if you follow these ‘rules’ you can still get unlucky and get in trouble. I had a close shave with a potential mass assault not too long ago and it is certainly an experience I wouldn’t wish upon my worst enemy.

Stay safe and please leave your own anti-harassment suggestions in the comments.

UPDATE: Please also read Amanda's excellent additional tips in the first comment on this piece. Sexual harassment in Egypt can be reported here.